A good many of you ladies know that 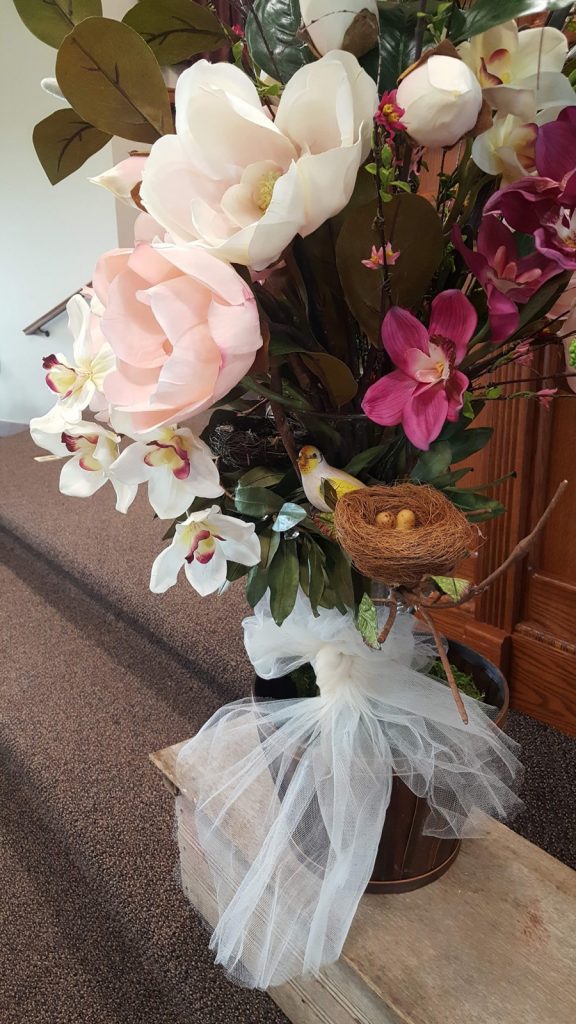 I can not seem to help myself from trying to convey or find some meaning behind the floral arrangements I create. This is so usual that some of you regularly ask about it or I may volunteer to share the thought with some random listener.

One month, for example, there was left a large gap in the arrangement, with a bird’s nest placed on a near-by bough, all representing our little ones who were “flying the coop” through moves, marriage, or finding themselves off at college and leaving a notable absence in our midst — my own daughter amongst them.

Another month, there was a busy fall display including a floral vine of fall hydrangea with twigs of tiny leaves, the last breath of summer intertwining pleasantly with a sturdy vine of grapes and a tender vine of berries alongside another supple branch of luscious pears. And on that fecund twiggery seemed randomly also to cling variously sized beautiful gourds. We must willingly suspend belief to make room for an artist’s license for the beauty of an arrangement…but one might have asked if there was something more here. And in this case, yes. 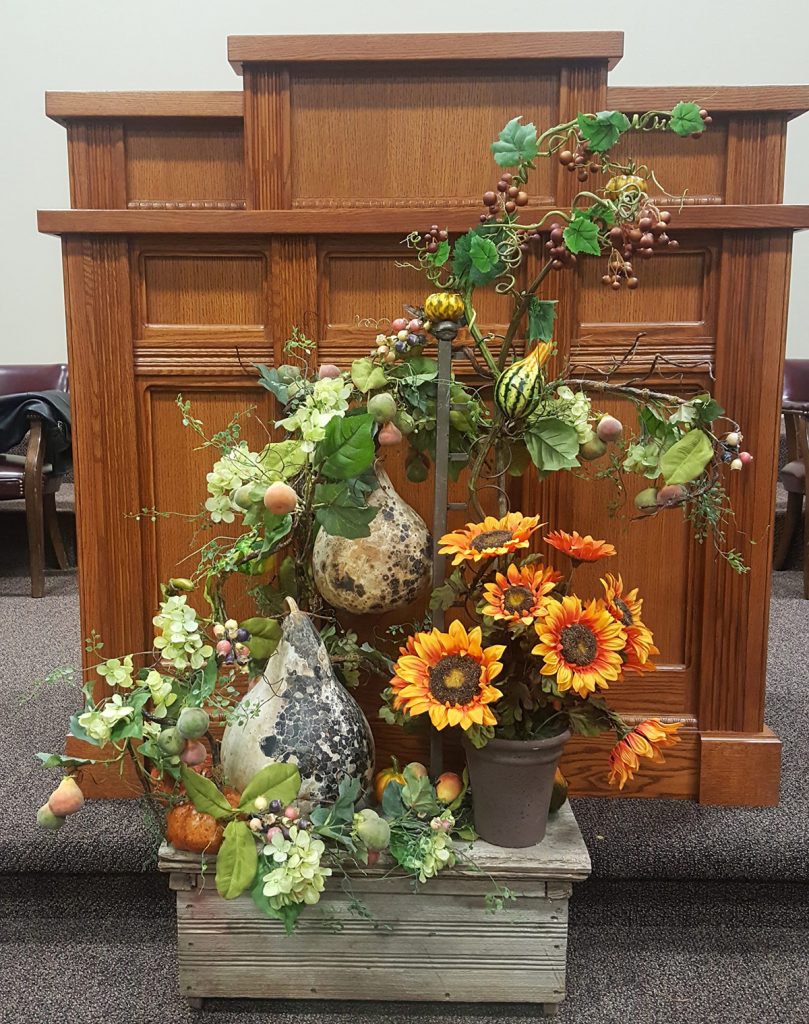 I had likened this arrangement to the people in earshot of the sermons which go over its pulpit backdrop into the audience and across the world week after week. The church at large is likened to many things. We are sheep. Christ is Shepherd. We hear His voice. We are the branches. He is the vine. And except we abide in Him we will not bear fruit. And the vine is known by its fruit. Grape bears grapes. Berry, berries. Pear, pears…but not gourds.

Likewise, the preaching goes forth amongst us, and just as we all come together, and listen together, and feast and intertwine in fellowship together, we nevertheless are not all healthy, hearty, and producing. Indeed, some of us are likely not even of the vine. Some among us are gourds. Religious but not redeemed. Sheep but not of His flock. Indeed some of us may be beautiful perhaps, but not branches bearing His fruit. 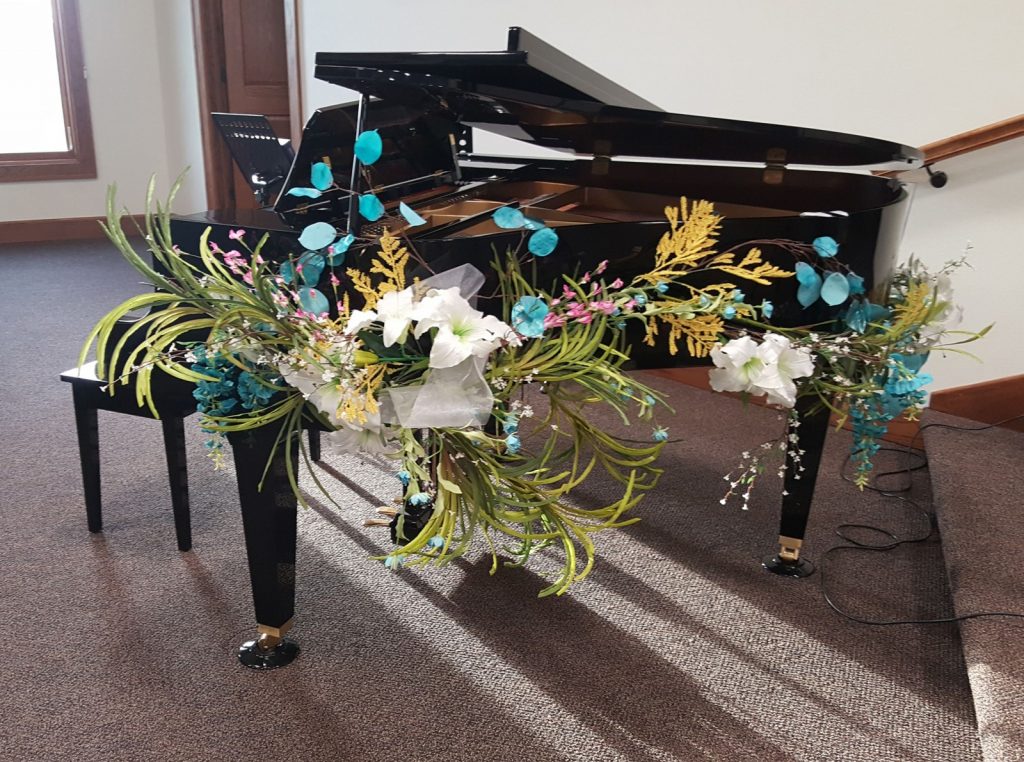 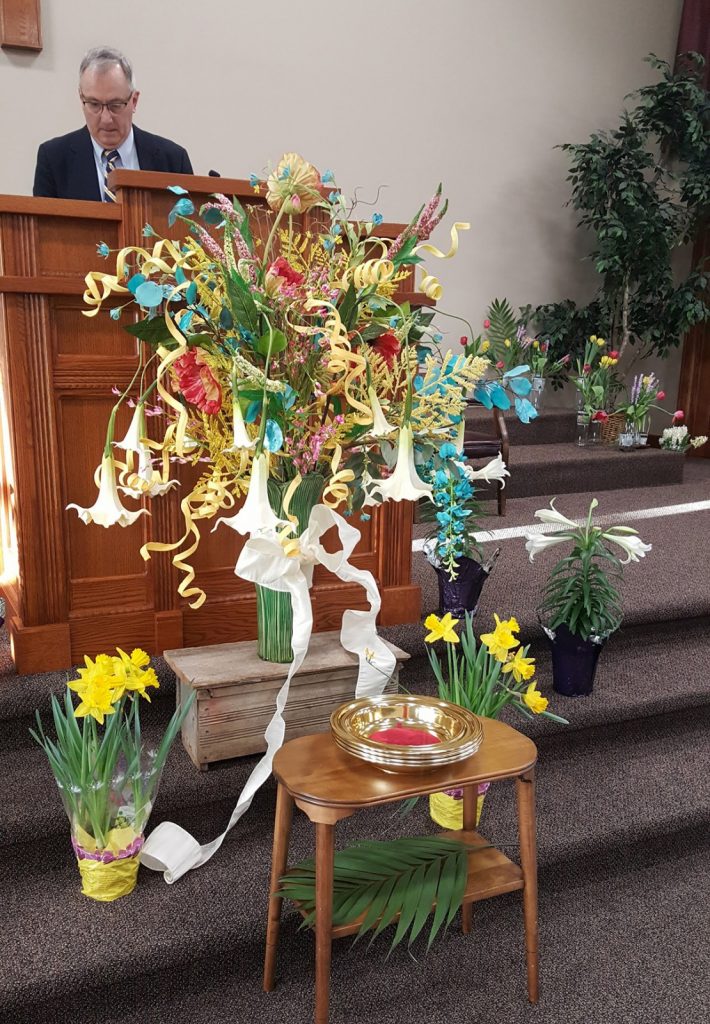 n one July, the subtle red, white, and blue flowers and sprays of its arrangement seemed nonetheless successfully to convey the motion of fireworks, a tribute of gratitude for this great nation. Before services on Resurrection Day, I have literally laughed aloud at the sheer exuberant expression of joy that I felt expressed in the room.

Never you mind, there have been times when asked about the meaning behind the month’s arrangement when I have chuckled and responded with, “Not a thing.” Or, “This is what happens when you wait too late to multitask poorly just one too many things.”

These vignettes are shared to prepare the way for one more. Last January, the arrangement had been made to convey an idea that had led me down what was a particularly contemplative path. Januarys and birthdays do that. In this case, such reflection led me to write some free verse. In the writing, it had not been my intention to share the poem beyond the few friends with whom I entrust such vulnerabilities. But since I have on multiple occasions been encouraged to share my intentional arranging I later changed my plan to include this written account which was set near the base of the flowers for those who happened by.

This January, having come “full circle” now, I am hesitantly compelled to share in this venue as well what had been written in January of 2020 revealing the mood behind the month’s color-breathless, January Floral Arrangement. But first, as there is nothing new under the sun, may I quote a verse best depicting my current take away from this? “Thou wilt keep him in perfect peace, whose mind is stayed on thee: because he trusteth in thee.” Isaiah 26:3

Written in free verse, meant to be read thoughtfully and taken in, this poem conveys the larger idea behind what is depicted in this month’s floral arrangement of “whites and creams and silvered grays.” Before us is the yet untold story of this new year: embraced, enhanced, and given life by the golden providential care of the maker of time and life itself. 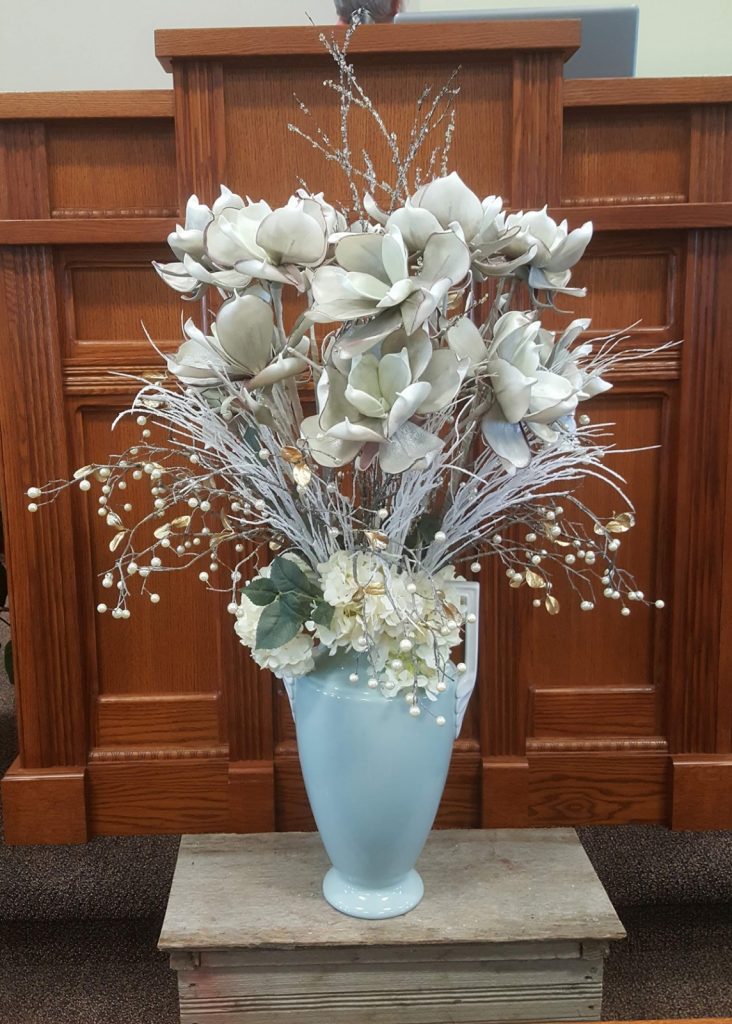 As innocent and colorless as deeds undone with no tales as yet to tell, no new griefs yet to bemoan, no glories yet to deflect, no yet wearied moon upon which to muse, the new year born as babe in arms protected now from all the harms of what is still to come does yet wait as swaddled in whites and creams and silvered grays for all its brilliant storied days.

But soon enough around the year, and around poor me, I sense and rest within, and feign would see those golden vines of providential care. Though it is the first and only color needed there, it draws forth rising brilliant tones and blush made richer from that glorious gold bequeathed unto the sons of God.

That gold draws fire from redemptive reds, and steadied grief-born blues will soon take on breathtaking subtle hues when laid across the reborn heart. The louring blacks, gritty browns, and swampy tangled greens from roiling year will bear the charge of solemn stillness for the front flanked scene of light and joy and peace.

We will journey through the year from its pales and silvered grays to forge through unknown armed and viridescent days to this full circle stop as though we had been here once before where only He has been and ever shall.